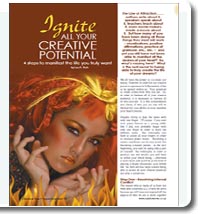 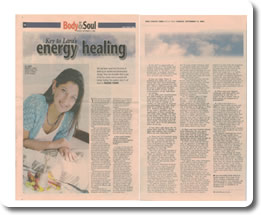 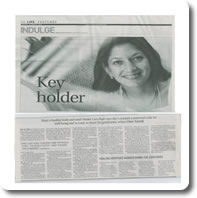 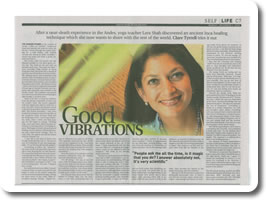 After a near-death experience in the Andes, yoga teacher Lara Shah discovered an ancient Inca healing technique……Clare Tyrell tries it out.

THE SHAMAN STANDS at the counter of Pacific Coffee on Central’s Hollywood Road and watches me scan the busy café for her. I weave through the tables, looking for a half Indian, half Turkish 34-year-old. Seeing no likely candidate I retrace my steps and order a green tea. And there she is.

She is tiny, only 1.52 metres tall, and casually dressed in a tie-dyed green cotton top. She looks at me with an amused smile and says “You must be Clare.” Lara Anuradha Shah landed in Hong Kong last week. She is here for a month as part of a tour of Asia from her base in Florida, offering one-to-one treatments of an ancient form of healing known as Transmutation Therapy. It is a rare form of energy work that is practiced by only a handful of people in the world –all of them in Peru- and is said to have originated thousands of years ago in Ancient Lemuria, the continent that reputedly once existed in the Pacific Ocean. The tradition was passed on to the Incas and then moved through a tight lineage to modern man.

Shah is the first to bring the tradition from the distant mountains of Peru into the world’s cities. She moves elegantly with her cappuccino and we settle into a sofa. The story of how she became versed in the strictly guarded tradition is remarkable. The former journalist – who once worked as a freelance writer for the likes of Financial Times, Business Week and the Washington Post – was living in Mumbai, India, when a little over four years ago her life began to change. Teaching yoga, more and more clients became interested in learning about its healing aspects. She began to study various forms of healing, such as Sekhem vibrational healing and Cranio-sacral therapy. Then in early 2002, she upped and left for Miami with her Siamese cat.

“I just felt it was time to leave even though I had nothing to go to,” she pauses and, as if reluctant to use such language, adds, “It’s as if as it was all divinely guided.”

Continuing to follow her “intuition” she wasn’t in the US long before she took a trip to Peru (leaving the cat with friends). No sooner had Shah arrived in the Andes, at an altitude of 4,000 metres, than she became ill with a virus. Within 48 hours she was close to death – her organs, in particular her kidneys, had begun to fail. “I was in excruciating pain, she says. “I slipped into a coma.”

No medical doctor was called. Instead, a shaman from a nearby area arrived and began to work on the patient using the rare Incan Transmutation therapy. During her three hours in the coma, Shah remembers hearing “beings – angelic beings or whatever you want to call them. They basically reassured me that all this was not as it appeared to be. I had been brought there for a purpose. They actually told me that it was necessary for me to experience the healing that I was going to experience.”

Over the course of a week she received intensive treatments from the Shaman and was miraculously cured. “It’s all energy”, she says in her soft voice, with the mildest traces of an American accent, and with her hands dancing. “There was nothing to be taken internally, no medicine, no herbs. I just drank water. It’s a method of light touch on very specific body parts, mostly on the head.”

The Shaman then announced that he wished to initiate Shah into the technique, a rare offer considering that it is only known by a strict few. Taking her to sacred ruins, Shah says that he opened up her energy channels at the top of her head. “I have experienced Reiki but this was very different. Everything got heightened. I could see the difference after the initiation.” She looks at me intently, smiles and nods.

But how on earth does it work? After an hour and a half’s conversation I am nowhere nearer to understanding. Although there is talk of raising the body’s vibrations and working with the “12 bodies” that make up a person, it is hard to know exactly what she means. There is only one way to find out. Although Shah works with people with serious diseases, she stresses that the treatment is equally suitable for perfectly healthy people “who would like to grow spiritually, to open up their perspective and their powers..to become more intuitive, for example.” I book an appointment for two days later. Arriving feeling a tad sick from an evening of overdosing on sushi and wine, I lie on the massage table and am soon aware that something unusual is at work. She gently lifts up my head (which feels strangely heavy in her small hands) then gently lays it down again, softly pressing either side of my scalp. With my eyes closed, it feels, in the darkness, as if gravity is slipping away. As she eases the pressure from side to side, it begins to feel like I’m turning somersaults in space. She moves to my feet and applies what feels like her thumbs to my soles. They become hot almost to the point of burning, and then subside.

The rest of the 90 minutes is spent in a profoundly pleasurable state. At times I can feel my internal organs being massaged – even though her hands are working nearly 30cm above my stomach! As she lays her gentle hands on points on my knees and face, I can feel my body doing all the moving, internally. Something she mentioned in our previous meeting comes to mind: “It’s not my energy, it’s universal. I just function as a conduit of it. The actual healing is done by the patient.” I then feel her cleaning and swiping “stuff” from the air around me and as she does it, clear thoughts and realizations about my life hit me. By the time she has finished I feel spectacular.

My energy levels are racing and my body feels internally cleansed. “People ask me all the time,” Shah says, “is it magic that you do? I answer absolutely not. It’s very scientific. You can go into laws of physics and explain a lot of it. It’s not magic at all. And I would love for left-brain people to understand that, that it’s not hocus-pocus. It’s not just laying your hands on somebody, there is a process which occurs.” Beyond the energy work, Shah has personalized her form of healing to fit the modern world. She has a set of 12 “Universal Laws” which she says are channeled to her from “ancient knowledge that has always been there”. She gives an example: The Law of Frequency. “Everything vibrates at a certain frequency: our cells, our thoughts, space, plants, everything. Let’s say someone has a virus in the body, that virus is vibrating at a certain frequency too. Like frequencies attract. If the body’s vibration is at a much higher frequency than the virus, then it cannot attach itself comfortably…the environment (the body) becomes hostile for the virus. In this case, the aim is to raise the frequency of the whole being.” She will be expanding on these laws in a workshop this Saturday, and publishing a book next year. “In my opinion these laws have largely been forgotten by humanity. I’ve taken it up as my project,” she laughs. “My mission in life is to address these laws in the healing process.” Her mission to bring Transmutation Therapy to the masses is also revolutionary move for a technique that has remained secret for so many years. Does the Shaman who taught her approve?